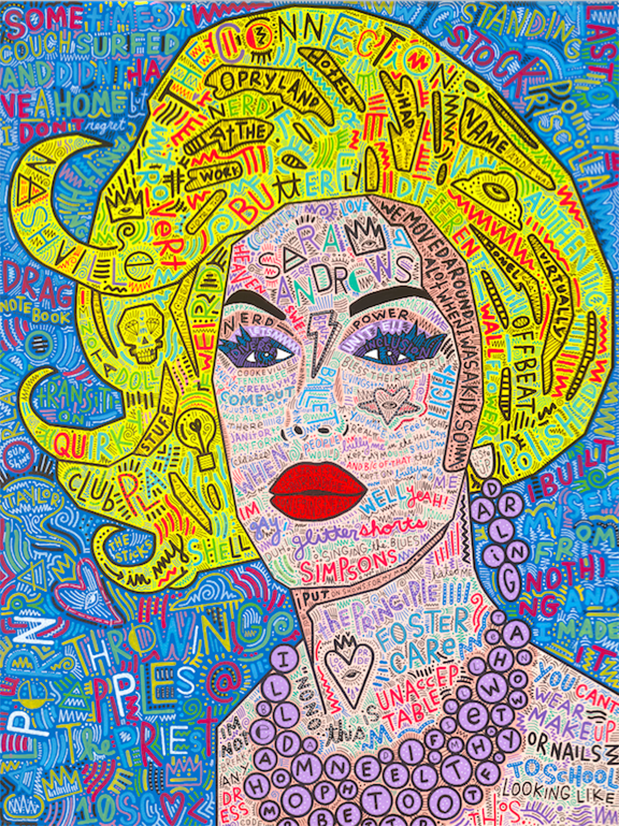 Sara Andrews, raised in Cookville Tennessee, spent most of her youth in the recesses of the deep south. Her family came from a lineage of impoverished southerners, who despite their best, fell on many hard times. Sara recalls, “My mother came from completely nothing and strived to do her best to take care of me. I was incredibly feminine growing up, and she never scolded me for that… She let me play with barbie dolls and let me be myself. Even when it came to my father, who hated my feminine side.. my mother stood up to him, telling him his behavior was unacceptable”. Sara however would later end up in the foster care circuit from 10 to 17 years old, and for that time period she moved around to various different cities and different homes.

Sara, despite the many odds against her, fought her way through life with what she describes as an inherent rebellious nature. “I was really born with this incredible rebellious streak,” Sara says,” I remember when I was a kid, I wanted my mother to buy me a toy and she couldn’t afford it. I was just a kid so I didn’t understand anything about money or being poor.. so I threw an incredible tantrum. When we got home I refused to go inside, and instead climbed up the apple tree in our yard. I stayed up there all day and into the beginning of the night. It was perfect because whenever I got hungry I would just eat apples. When it became super late, my mother asked me to come down and I still said no. .. So she called the cops. Let me tell you, … the cops came… the fire fighters came.. and EVEN THE PRIEST CAME.. And they pleaded for me to come down… I still said no. It came to the point where they were making an effort to bring me down, and I responded by hurling apples at them. Yep. I threw apples at all of them,.. even the priest. I think I was seven at that point?”
Later on that rebellious nature would further help her fight against the homophobic elements of her town. Sara states, “When people would bully me in the hallways, I first kept my mouth shut, and because of that, they kept on bullying me. Eventually when I came out, I suddenly had power. If I was called a faggot, I’d respond “Well duh you dumbass, I am gay!!”… It was the principle however that was the biggest bully. He hated the way I dressed… Last day before Christmas break he pulled me over in the hallway and said “No no no, this is unacceptable.. You can’t wear make up or nails to school… You can’t be like this and come to school looking like this.”

“I’m not good with authority and I imagine thats from being in foster care and having to be very independent.. .. you can’t tell me what to do. So I told him that I wasn’t breaking a dress code because girls wear make up and nails… and thats a double standard. I walked out when he said “If some big old dude thinks you’re a faggot and hurts you, its because I didn’t tell you enough to take that shit off”.. and sure enough later when I returned after the break and was still wearing the same thing… he gave me an ultimatum… and threatened to expel me for the way I dressed. I chose not to go back to school… and I got my GED instead.”

Sara found solace however in drama and dance. As a child she’d put on shows for her mom, often doing interpretive lip sync’s to The Simpson’s “Singing the Blues”. Later on in foster care in high school she attempted to take ballet classes, but her foster parents wouldn’t pay for it saying “Boys don’t do ballet”. Resilient, Sara continued to try, and was offered a scholarship by the owner in trade of janitorial services. Sara continued to take ballet classes while cleaning the studio daily.

It was also around this time that Sara’s interest in performance and drag blossomed. “Seeing “To Wong Foo” changed my life. Because of that movie I spent my entire high school life studying drag queens. Any movie or book I could find about drag I would read and watch about. Wigstock, Priscilla, any thing gay and queer… I just had to study it. I knew seeing this, that drag was something that I wanted to do,… drag was something I wanted to be.”

Out in Cookeville, Sara started driving out to Nashville weekly to perform at the amateur night at “The Connection”. Sara says, “You’d have to show up early to perform… they’d only take the first 10 performers so I was dedicated to getting there 2 hours beforehand to have the chance to perform. We were a tight knit community of amateurs that would be there every Wednesday to do drag.”

It was here that Sara moved to Nashville, Tennessee. “As soon as I could I moved out of Cookeville. I heard that the Opryland Hotel was hiring. I went there, applied, and got the job.” Sara continues, “On the way back to Cookeville my car broke down, but I’ll be damned if that was going to take me down. I packed up my stuff and lived in a cheap hotel next to the Opryland Hotel. I had no car, I had 300 dollars to my name, but I was determined to make a life there. I eventually saved enough money to survive and worked hard to live there.”

Sara, with great determination to be a part of the drag scene, became a permanent cast member at the club she performed at. With the help of Calpernia Addams and Austra, her first performer name “Butterfly” took to the stage with such great ferocity. “I chose “Butterfly” in the beginning because it made so much sense to me. Drag IS a butterfly. It’s someone who is a caterpillar that turns into a butterfly. They turn into something colorful and beautiful.”

“Butterfly” eventually blossomed into Sara Andrews, and she took Nashville by storm. It was here where Sara became everything she wanted to be, and met her husband Taylor. From there they moved to Orlando for a brief moment, and then to Chicago. “I was working here and there at the Kit Kat Lounge in Boystown and I knew that Chicago was the place for me. This city is amazing because in Chicago you can be as ’out of the box’ as you want to be. There is a lot of opportunity for us here… it is so diverse and accepting”.

Sara Andrews is a trans activist, performer, top notch “gaymer”, and recently the owner and creator of her wig business “Wig Takeout”. In asking her about who she is, Sara says, “I’m nerdy for sure. I’m polished but I’m different. I believe in glamour but I’m not a doll. I’m introverted and socially awkward and I can be a wallflower for sure, and its because I feel like I’ve never really fit in, but I’m here. I’m present and I’m authentic.”

For me personally, in interviewing and getting to know her, Sara is one of the most wonderful people I have ever met. As a fellow Chicagoan transplant via the south, I relate to certain elements of her story. Sara is engaging, beautiful, and charming… but more importantly she is a powerhouse of justice for trans and queer people in this city. Painting her was one of the most gratifying moments of my “Drag Landscapes” series in Chicago, and I am honored that she let me hear her story and paint her.